The mid-engine Corvette has finally arrived on the market! It was a promise that GM showed and never fulfilled.
But now it is finally here! Since the C4 Corvette, all the others were, basically, more or less just updates. But the leaf-spring transverse suspension was there, the look was about the same and the 5.7-liter V8 engine was only technologically updated. The LT1 engine introduction in 2014 with the 6.2-liter displacement was considered a breakthrough. But it still kept the same push-rod distribution system.

The new C8 comes with the LT2 version of the same engine and very close performance figures of 490 hp and 630 Nm (465 lb-ft) of torque. The performance package adds 5 more horses to the output due to a different exhaust. The transmission is an 8-speed dual-clutch that sends the power to the rear wheels. The good thing is that the transaxle system, with the engine in the front and the gearbox in the back, is gone. It was good, but this mid-engine is better.

The bodywork is made out of reinforced plastic materials, that help reduce the overall weight of the vehicle and improve performance. And the interior looks like it was taken from fighting machine from Star Wars. Altogether with its buttons and controls and touch-screen displays. 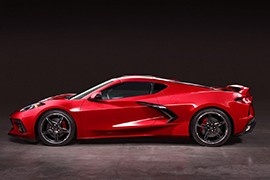