The Chevrolet Lacetti was based on the Daewoo’s J platform and was initially known as the Daewoo Lacetti on most pre-2004 European markets.
At the end of 2004, following Daewoo’s takeover by the GM, the North American auto producer re-branded all Daewoo Lacetti versions - sedan, hatchback and station wagon - into Chevrolet Lacetti. The European models are offered with a choice of diesel/petrol engines, while sharing its 1.8L power plant with the Opel Astra 2004. Depending on the market, the Lacetti was commercialized either as Daewoo or as Chevrolet by the mid-’00s. 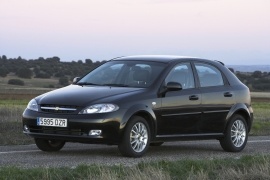