The Chevrolet Suburban was first produced in 1934 and is the longest-running continuous nameplate in production establishing.
At the end of 2019, a new chapter in the Suburban story began with the introduction of the 12th generation.

The 2020 Suburban has a longer wheelbase than the previous model and new chassis systems that create greater ride smoothness, particularly on uneven pavement and unpaved surfaces. The new Suburban has the most passenger and cargo space of any SUV in its segment. The new multilink independent rear suspension, new technologies like Rear Pedestrian Alert and HD Surround Vision, new rear-seat media system and the new interior were specifically designed to take advantage of the class-leading space, with a mission to create the ultimate road trip environment.

It is worth mentioning that the vehicles’ load floors are significantly lower, providing a more natural seating position and a remarkable gain of 10 inches (254 mm) of third-row legroom, with big increases in cargo space.

As for engines, the optional Duramax 3.0L inline-six turbo-diesel is available on all models except Z71 and develops 277 hp of power with a strong 460 lb-ft of torque, providing some of the highest fuel economy ratings in this segment.
At this time, Chevrolet Suburban is the only one in its segment with a diesel engine. 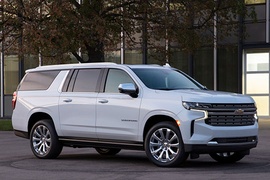