Chevrolet prepared in 2018 a special package for the eleventh Suburban generation, which brought more power and more performance to one of the most oversized SUVs on the market.
The Suburban was always the less-equipped version of the Tahoe, even if GM built both of them on the same chassis. It shared more parts and features with its spoiled brother but usually didn’t get the same engines to play with. The 2018 Suburban RST, or Rally Sport Truck, came to fix that and provided more than just more ponies under the hood.

On the outside, the carmaker deleted all the chromed trims from the grille, door handles, and side step-boards. The carmaker painted them in body color and, if the car was black, it offered an aggressive look. Moreover, its red brake calipers from the 410 mm (16.1”) Brembo brakes were a clue that it was more than a customized Suburban.

Inside, the Suburban RST featured three seat rows for seven adult passengers with captain seats in the middle. Its leather-clad interior looked nothing less than a Tahoe. On top of that, Chevrolet included two folding screens mounted on the ceiling for rear-seat entertainment. The dashboard and instrument cluster showed a similar look to the rest of the Suburban range.

On the technical side, the RST featured a 6.2-liter V-8 engine that provided 420 hp, and GM paired it to a standard 10-speed automatic. 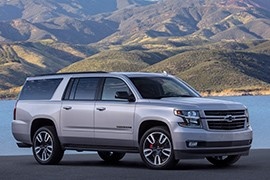