Discontinued in 2008, after only seven years on the North American market, the Chevrolet TrailBlazer was revived in 2012 as an SUV destined for a number of emerging markets.
Unveiled as a concept at the 2011 Dubai Motor Show, the second-generation TrailBlazer is built in Thailand and Brazil and shares platform with the 2012 Chevrolet Colorado. The vehicle is available with two diesel engines - 2.5 and 2.8-liter Duramax - and a 3.6-liter gasoline unit that’s available only in Brazil. The new TrailBlazer is also marketed in Australia as the Holden Colorado 7. Other markets include South Africa, Saudi Arabia and some Southeast Asian countries. 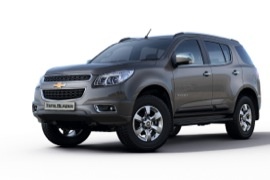