The third generation of the Citroen Berlingo was released in 2018 and came with big improvements across the range.
From the utilitarian vehicle adapted for passenger transportation it became a true MPV without forgetting its roots as a compact utility vehicle.

It still has the same shape with a high roof and sliding doors on the side, but it doesn’t look like it belongs to a warehouse anymore. The French stylists made it with short overhangs and a high front profile, like an SUV. It can be fitted with Xenon headlights and has standard LED daytime running lights (DRL).

Taking their inspiration from the world of furniture and travel, the designers developed the interior of new Berlingo to be functional and high quality. They used soft-touch and warm materials to make occupants feel good. The interior is available with new trim and a varied set of colors corresponding to several interior ambiances.

Since the platform is the same as the one from the Peugeot 308 passenger car, the ride is smoother. The available engines are a 1.2-liter gasoline engine with 110 hp mated to a 6-speed manual gearbox and another 1.2-liter turbo with 130 hp mated to an 8-speed automatic transmission. For diesel fans, there is also a 1.5 liter in three outputs versions: 75 hp, 100 hp, and 130 hp, respectively. The latter can be mated to an 8-speed automatic gearbox. The others have a 6-speed manual. 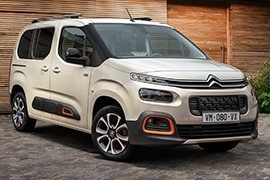