The SUV-Coupe mania was a trend that affected more of the up-market products, such as the BMW X6 or the Mercedes-Benz GLE-Coupe.
But Citroen tried its luck with the 2020 C4.

The French car-maker was successful with the introduction of the C3 Aircross and C5 Aircross. It sold more than half of million units before it introduced the C4 in 2020, and it was not named Aircross anymore. It was just C4.

The SUV-Coupe silhouette of the C4 was different than the one on its predecessors. The first generation of the C4 was a sloped-back compact vehicle, while the second generation featured a classic hatchback styling. The third generation was a revolution with an SUV stance, a higher ground clearance, and a liftgate in the back. The new shape of the headlights resembled other products from the French manufacturer range, with the daytime running lights installed between the headlamps and the hood.

Inside, the revolution continued with a fully digital instrument cluster and a touch-screen infotainment system that was more accessible for the front passenger. The head-up display was carried over from its sibling, the C5 Aircross. The interior was fitted with soft-touch materials and premium trims. It was available with leather upholstery as well.

For the drivetrain, Citroen brought something for everyone. It was fitted with the already known 1.2-liter turbocharged engine that offered 100 hp, and it went up to a 155 hp 1.6-liter unit. The French car-maker offered the 1.5-liter unit for the diesel fans, while for those looking for an electric motor, there was a 136 hp version. All versions were front-wheel-drive. 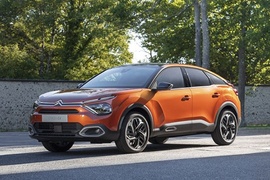