Citroen launched its second DS model (the French carmaker’s new luxury line) in 2010, with the brand new DS4 being largely based on the C4 model.
The car was initially previewed by a High Rider Concept at the 2010 Geneva Motor Show, but was officially launched at the Paris Auto Show, in September the same year. The C4-like bodywork has now been added with LED DRL’s around the fog lamps, up to 19-inch wheels, and boomerage shaped tailights. Interior-wise, the DS4 comes with a driver-orientated cockpit, panoramic windshield, ambient lighting, lots of chrome trim and leather. 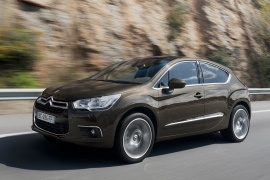