The Leon Cupra reached its 4th generation in 2020, coming with two available body styles: a 5-door and a Sportstourer.
The new model came with new horizontal headlamps offering a different design from the previous one, which were wider and positioned in a different angle.

The front bumper was redesigned to give the car a more aggressive look. It was a muscular, strong bumper with vertical gray cosmetic elements that were not for design purposes only and had also a practical aerodynamic effect by channeling the air towards the sides.

The stability was improved due to the longer wheelbase, however, that also came with compromising a bit of the car’s agility. The car was longer by 9cm than the previous model. New 19-inch wheels were added, with the alloys having a special design including the copper accents already known to the public that come with the Cupra.

The exterior design was refined with sharp lines that started from the front and faded towards the rear. The rear of the new Cupra brought a three-dimensional sculptural back with a horizontal leg light strip that animated differently depending on the action taken. For example, when locking the car, the light would cascade from one side to the other.

For 2020, Cupra also brought the electrified version, a plug-in hybrid engine developing 245 hp.
Safety wise, the car was equipped with the most advanced systems to protect the driver and passengers from unwanted incidents. 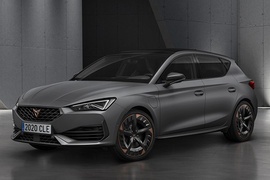