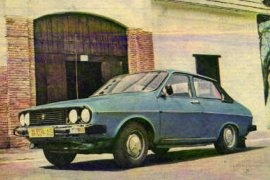 Between 1981 and 1985, the Dacia Sport was using even the same short doors from the sedan version, looking a bit odd for a coupe. After 1986, the model received longer doors and shorter rear windows.

Another interesting fact about the Dacia Sport was that its rear window was actually a front windshield fitted at the rear of the cockpit, for cost reduction reasons.