In 2021, Dacia fixed the problem and made the Jogger a true replacement of the original MCV, but better. With a surprisingly fresh design, it was a crossover between a station wagon and an SUV. At the front, the black trims over the bumper and the angular-shaped headlights created a dynamic look for the car. Its flared front fenders resembled the same styling as its SUV family, the Duster. At the back, the third row of windows featured a pop-out opening system. The tall taillights mounted on the C-pillars at the back resembled those from the Volvo XC90’s first generation.

Inside, the roomy vehicle sported a pair of seats at the front, three folding seats in the middle row, and a couple of seats at the back. But those last seats were suitable even for full-grown adults. At the front, the carmaker offered an option for an infotainment system mounted in a floating position atop the center stack.

Under the hood, the carmaker introduced the vehicle with one engine choice, a three-cylinder, turbocharged gasoline unit paired with a six-speed manual. 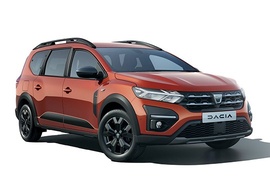