The Romanian company Dacia made a big step forward with the introduction of the Lodgy.
The Lodgy was a 7-passenger monovolume that was built in Tanger, Maroc.

Dacia used to produce cars for people on a tight budget, however, the car were extremely reliable and durable, even if equipped with fewer options and less quality materials.

Compared to the family car, the Logan MCV, the Lodgy’s length was increased by 1.06 inches, however, the interior space was better used.

Inside the cabin, the controls were intuitively placed and the overall dashboard gave an airy feeling.

The quality of the materials used was increased.

The cabin was quieter by up to 30% compared to Dacia’s previous models, meaning that the engine and the tire roll sound was reduced inside.

The Logdy was the first Dacia to feature a modern infotainment system called the Media Nav. The system was produced by LG and came with a 7-inch touchscreen display that was very responsive.

Additionally, the Lodgy came with an USB and an AUX port. 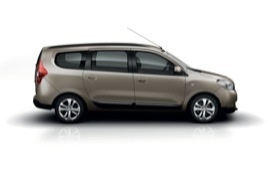