The Dacia Logan is a more family oriented vehicle produced by the French producer Renault in collaboration with the Romanian subsidiary Dacia.
The first generation of Logan was released back in 2004 and the new 2016 model was part of the 2nd generation, only a facelifted version of it.

The Logan was mostly known as a basic, reliable and durable car. It was designed to take people from A to B.

The Logan was available in a sedan, MCV or a van body shape, to suit all needs. It was mostly bought by people with a low-budget, for employees or as taxi cars.

Design wise, the new Logan sedan had a refreshed interior and exterior, making it more attractive to the buyers.

The changes include a redesigned headlamps and taillights, as well as the LED daytime running lights had a “pattern of four stacked rectangles”, as Dacia says.

Both the front and the rear bumper were redesigned to give the impression of a more muscular look.

The interior of the Logan was very roomy, with a good driving position, comfortable seats and intuitive simple controls. Even if the plastics used for the dashboard and door trims were hard plastics, the overall design looked fresh.

Unexpectedly, the trunk space was enormous. So if you’re thinking to take half of your house with you, you might as well do it. The load area had a capacity of 510 L.

The basic Logan designed to be a people’s car was a little bit over $13,000 with most of the optionals included. 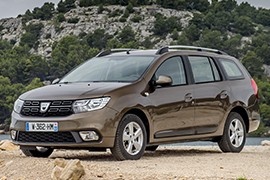