While some were disappointed that Datsun changed its name to Nissan, the marque has been revived and brought new vehicles to the table.
The new mi-DO was released in 2014 at the Moscow International Motorshow. It shared the same platform with the on-DO sedan and was a budget hatchback design to suit the everyday needs.

The mi-DO was available for sale only in Russia. The small car was comfortable and Datsun equipped it with lots of safety features. Every trim level had a driver and passenger airbag, as well as ABS. Heated seats and door mirrors were offered with the standard version.

The power was developed by a 1.6-liter 8V engine, producing 87 hp. The car was available with a four-speed automatic or a five-speed manual transmission.
Even though it was a small car, it provided more than enough head and legroom for both front and rear passengers, as well as trunk space.

The infotainment system consisted of a 7-inch LCD touch-screen display and included advanced navigation with City Guide maps and 3D display. Buyers could connect their mobile device via Bluetooth and easily make or receive calls.

The exterior design was modern, with eye-catching chrome used for the car’s character lines. The look of the small car showed confidence and managed to turn heads. 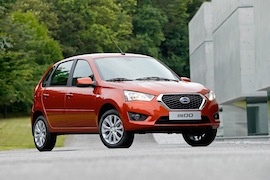