When some people are growing up and need a 4-door vehicle, but they don’t want to lose the driving satisfaction achieved on their previous muscle car, a Dodge Durango SRT might be the right answer.
The Street and Racing Technology department from FCA (Fiat-Chrysler-Auto) developed different solutions to make the cars faster. Their involvement in cars such as the Dodge Challenger or Charger was noticed. The same department now managed to give a new heart to the Dodge Durango: the Hellcat engine.

Apart from the engine, the SRT department enhanced both the exterior and the interior. From the outside, the Durango SRT Hellcat featured a modified front bumper design with a black mesh grille. The lower apron might look inappropriate for an SUV, but it looks good on the Durango, and it made a good company for the scoop in the hood. In the back, the roof-spoiler was more for show than for a real aerodynamic purpose.

Inside, the SRT department didn’t spare any moment to enhance the car’s look and feel. The front bucket-seats looked like they belonged into a Challenger. The multi-function touch-screen display fitted into the center stack offered more menus specific for the SRT version. Some physical buttons helped the driver to get all the power and control the car. The three-rows interior provided enough room for six passengers, with two captain chairs in the middle row.

Under the hood, the SRT department squeezed a V8 engine offered in two versions. The regular Durango SRT featured a naturally aspirated unit, while for the outrageous Hellcat version, the special Chrysler’s department installed a supercharged unit. Both versions were mated to an 8-speed automatic gearbox. But, unlike its Challenger Hellcat brother, the Durango was fitted with an all-wheel-drive system. 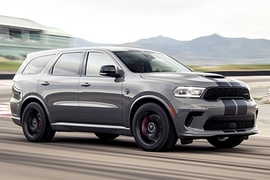