The spiritual successor of the oldschool 124 Sport Spider came in 2016 under the Fiat 124 Spider name.
The new model is completely based on the fourth generation Mazda MX-5/Miata. Although the two convertibles share the same chassis, the 124 Spider is 5-inches longer, heavier than the Miata, comes with its own styling and is powered by a Fiat designed and made turbocharged engine. At launch, the Fiat 124 Spider was available in a limited edition called the Spider Anniversary and later it received the Abarth treatment as well. Some people like to mock the model and call it a ‘Fiata’. 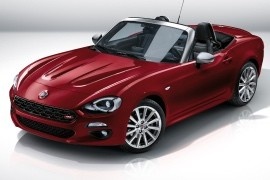