The Fiat 500 Abarth brought world-class performance and precision, purposeful and aggressive styling, high power-to-weight ratio and limited-production volume to North American driving enthusiasts in 2012.
Adding even more excitement to Karl Abarth’s line of “small but wicked” cars, the new 2013 Fiat 500C Abarth Cabrio harks back to his open-air track cars of the 1960s, while delivering the most visceral experience of any modern Cinquecento to date. With the Fiat 500 Abarth’s high-performance DNA intact, the new 2013 Fiat 500C Abarth is engineered with the same track-proven attributes that have made the hatchback model a success on European and North American roadways and racetracks, but now brings even more fresh air and the unmistakable Abarth-tuned exhaust note into the cabin. With just the push of a button, the Fiat 500C Abarth’s power-operated cloth top retracts up to the rear spoiler during speeds up to a best-in-class 60 mph (a midway point can be chosen by pressing the button anytime in between). Press the roof button again, and the roof will neatly fold all the way open and tuck neatly behind the rear head restraints (up to 50 mph). The power operated cloth top is also intelligently designed. 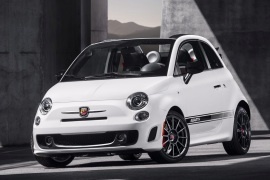