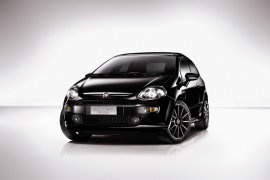 Fiat introduced a facelift for the Grande Punto lineup in 2009, and it changed its name into Punto Evo.
It was available in a three or five doors configuration.

The Italian carmaker didn’t change the car’s base, even though it changed its name. It was still built on the same platform as the Opel Corsa (Corsa D), which was provided by a Fiat-GM agreement after a failed merger during the world financial crisis.

Fiat introduced a new front fascia with a chromed slat between the headlights along with the facelifted version. The grille was smaller, and the headlights featured clear-lens glass. Its turn-signals moved on the bumper instead of inside the headlamps. In the three-door version, it looked sportier and bold. Depending on the trim level, the designers installed a pair of chromed door mirror cases. At the back, its taillights were redesigned and received a different styling with clear-lenses and a red surrounding on their outer side.

The interior was completely different than on the non-facelifted version. It featured a center stack with trapezoidal air-vents on top, and the main design trend was with curved lines on the dashboard. Its dials were encircled with silver rims in the instrument cluster and a binocular style for the speedometer and tachometer.

As of 2009, Europe introduced the Euro5 emission norms, and the car received new powertrains. Fiat dropped the twin-air engine from the non-facelifted version, and the base version became a 65 hp 1.4-liter gasoline unit. The top of the range version was powered by a turbocharged 1.4-liter that provided 135 hp. The Italian carmaker offered the Punto Evo with a choice of five turbodiesel engines as well. 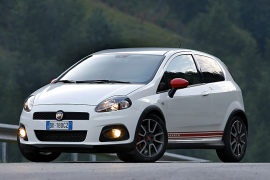 While other carmakers started to build sportier versions for their hatchbacks, Fiat revived a former glorious brand: Abarth.
Back in the ’70s and ’80s, Abarth was a known brand. It prepared various Fiats for racing, either in closed circuits or in rally racing. In the late ’80s and the ’90s, that nameplate was almost forgotten by the customers. But Fiat didn’t forget its former partner and produced an Abarth version for the Grande Punto in 2007.

While it shared most of its parts with a regular Grande Punto, the Abarth version was unique. It sported a new front bumper with piano-black side-scoops and a wide lower grille divided by a fat slat needed for the license plate. Apart from its unique wheel design, the Abarth featured side stripes similar to those added on race cars.

Inside, the carmaker installed a unique interior with aluminum trims on the doors and dashboard. The front seats featured integrated headrests and high-bolstered areas to keep its occupants in place on a fast winding road. To enhance the sporty feeling, Fiat placed drilled aluminum pedals. A three-spoke, thick steering wheel improved the driver-car relationship.

Under the hood, Fiat introduced a turbocharged gasoline engine. It provided enough power to keep a Golf GTI on its toes around a race track. But the upgraded version didn’t stop at the powerplant. A six-speed manual was the only transmission choice, while Abarth engineers worked overtime to fine-tune the suspension and improve Grande Punto’s road-holding. 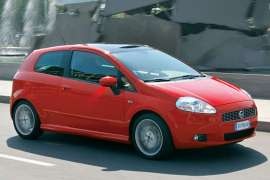 Fiat introduced the Grande Punto in 2005, as a successor for the Punto range, but bigger.
It was offered with three and 5-doors versions.

Gone were the straight cuts and the angular lines from the Punto. The Grande Punto came with a rounded bodywork, Maserati inspired headlights and an ascending beltline. The flared wheel-arches evoked sportiness and a muscular presence, even though in most of the engine versions, that wasn’t true. It took the idea from the Punto to install the taillights vertically on the C-pillars. Last but not least, Giugiaro and its Italdesign Studio signed the design.

With a much better interior than on the older generation, the Grande Punto offered better instrument readings and more safety features. There was a good room in the front but limited on the back seats due to the short wheelbase. Its side windows for the rear passengers didn’t provide great visibility. But no one cared. The exterior looked great!

For the engine bay, the Italian engineers prepared a wide choice of options. The three-door version of the Grande Punto was fitted with engines ranged between 65 hp and 129 hp. Apart from the top diesel-versions, which featured 6-speed manuals, the rest of the range was paired to a 5-speed manual.