The Fiat’s success with the Panda started back in 1980 and since then, the company produced over 2 million Pandas and the number kept growing with every new generation.
In 2011, Fiat decided to revive the Panda and give it a more mature look, but with the same versatility displayed by the previous models.
Fiat has thus launched a replacement in the form of the new Panda, which made its debut at this year’s Frankfurt Auto Show.

The Panda was offered with 3 engine options: a 0.9-liter aspirated TwinAir developing 65 hp, a 1.2-liter Fire Evo II (optimized valve timing at all engine speed and ensure higher torque) with 69 hp and a 1.3-liter Multijet with 75 hp.

The gasoline engines and the 1.3-liter multijet offered a Start&Stop system as standard, which reduced the fuel consumption and the CO2 emissions.

Even if the Panda was a small car, its trunk was still very spacious and could comfortably accommodate 5 people. The load area could go up to 260 liters with the rear seats folded. Another smart thing was the thin front seats that ensure enough legroom for the rear seats passengers.

At the launch, the Panda was offered with a two-wheel-drive, however, later on, a Panda 4x4 was presented to the public. 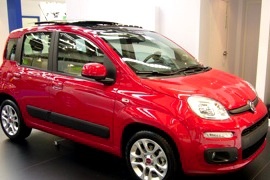