One of the best-selling minivans in its segment, the Ford Galaxy is now at its third generation, which was introduced back in 2015.
Four years later, Ford has decided to gift the model with a rather extensive mid-cycle facelift. On the exterior, by far the biggest modifications are found at the front, where the upper front fascia has been completely revised, while the lower fascia is now paired with a new grille.

The facelift includes a bright chrome fog lamp surrounding that mirrors the one found on the upper grille. On the other hand, the ST-Line version gets a different honeycomb upper grille with a black surround and blag fog lamp surrounds, while the S-Max Vignale gets a unique “flying V” design with a satin chrome surround to further distinguish the trim levels. On the inside there are now 18-way adjustable driver and passenger seats that can provide relief for back pain-sufferers on the road, having received the AGR seal of approval, an independent testing committee of medical experts. Just like its platform brother, the S-Max, the revamped Ford Galaxy is now offered with FordPass Connect, which is a on-board modem that essentially turns the car into a mobile WiFi hotspot with connectivity for up to 10 devices at the same time. 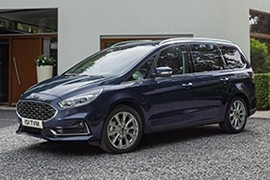