The Ford Mondeo was introduced to the market in 1993 and it was produced ever since.
In 2014 it reached its fourth generation, but it had to be refreshed due to European regulations.

The fourth generation of the Mondeo received an ample facelift in 2019. It wasn’t only for the looks but for the technological part as well. Due to its cavernous trunk space, the station-wagon version was one of the roomiest cars in its class.

The exterior of the car featured a new trapezoidal grille shape with a 3D effect. For the Titanium trim levels, it featured horizontal chrome slats. The lower apron featured a new grille as well and new fog lights. For the ST version, smaller winglets were added on the sides. In the back, the C-shaped taillights were intersected by a stylish, trim in satin silver or chrome, depending on the car’s version.

Inside, the customers had a long options list to chose from and to select the interior’s look. From different trims to different infotainment systems and instrument cluster. The base version was fitted with a combination of analog and digital display. The seats were comfortable and also offered in a few upholstery and comfort levels, but the split-fold rear seats were fitted as standard.

Under the hood, the Mondeo station-wagon was offered with a wide choice of diesel, gasoline, and hybrid versions. Depending on the powering option, the car was fitted with a 6-speed manual, a CVT, or an 8-speed automatic. An all-wheel-drive version was on the list as well. 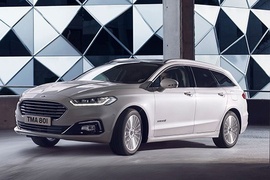