The Ford Territory was built in China and it was developed together by Ford Motor Company and Jianling Motor Corporation.
It was based on a Chinese SUV and sold only in China.

Doing car-business in China means that the manufacturers should work together with a local car-manufacturer most of the time. Apart from a few premium car-makers, most of the mass-production vehicle brands have an alliance with a local manufacturer since it is more affordable to built there than to transport there. Ford had a partner which already had developed their own product, the Yusheng 330.

The Territory had a different front fascia than the Yusheng 330. It features headlights that resembled other Ford models and a grille with a 3D mesh on it. The floating roof design concept was adopted well by the American car-maker for the Chinese market. In the rear, the design concept of the headlights was adopted for the taillights. Under the rear bumper, there was a fake splitter that was complemented by a dual exhaust system.

Inside, the dashboard was re-designed by Ford following modern concepts of ergonomy. It featured a large infotainment display on the center stack and a TFT display for the instrument cluster.

The drivetrain featured a 4G15 gasoline engine, which was a further development based upon a Mitsubishi 1.5-liter engine. It was mated as standard with a 6-speed manual gearbox and was offered with an option for a 6-speed automatic. 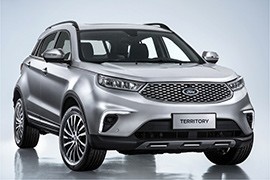