Essentially a more comfortable passenger version of the Transit Custom, the 2019 Ford Tourneo Custom features an improved interior, a brand new exterior design and Ford says it also offers a sportier driving experience.
The new model is building on the accomplishments of its predecessor, which was the best-selling minivan in its segment for two years in a row.

From 2019, the Tourneo Custom facelift is also offered with a plug-in hybrid (PHEV) version, which offers a zero-emission range of over 50 kilometers (31 miles) thanks to an electric motor combined with a 1.0-liter EcoBoost gasoline engine used as a range extender. Other powertrain versions include the ECONetic, which comes with a 105-horsepower engine that has a unique ECU calibration, Auto-Stop-Start, low rolling resistance tires, a so-called Acceleration Control feature and a top speed electronically limited to 100 kph (62 mph). The best selling model should still be powered by the tried and true 2.0-liter EcoBlue diesel powerplant. 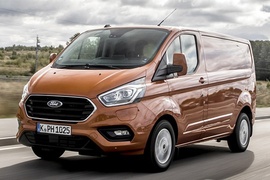