Geely’s LC Crossover is essentially the long awaited crossover version of its popular Geely Panda mini car, whilst the Panda relies on its cuteness to sell, it seems the GX2 will be relying on its trendy design and has had the cuteness factor scaled back in favor of a more rugged SUV style appearance, the spare wheel mounted on the rear hatch is certainly icing on the cake.
Whilst the GX2 has no SUV pretensions, especially with its front wheel drive system that derives power from a 1.5L producing 75kw and 136Nm of torque, it does have all the looks of a more rugged off-roader. The gaping, mouth ajar grill has finally been wiped away from the GX2 in favor of a much improved honeycomb style affair. The car was tested by the Chinese automotive website autohome.com.cn who found the GX2 to be of fairly good quality and impressive performance, which is something that CCT would be in agreement with. At a recent Beijing Automotive Parts show Geely had a Panda on display and we were able to go over it with a fine tooth comb, the Panda is an impressive vehicle in terms of build quality especially for its price segment, it appears that the GX2 will go on to continue with the Panda’s excellent quality. 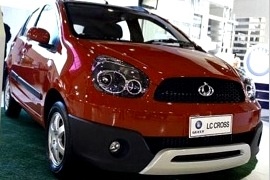