The LC hatch is said to get its styling from a panda due to the headlights and grille resembling the face of a panda bear and the rear lights that of bear paw prints.
The inside layout of the car is easy to use and the steering wheel is also tilt adjustable.

The Geely LC, sold in its home market as the Geely Panda, is a Chinese hatchback launched in 2009. In 2010 the LC scored 45.3 in C-NCAP crash tests, making it China’s first locally researched and developed compact car to be awarded a 5-star rating, and it is subsequently the safest Chinese hatchback as of 2011. 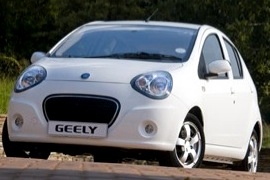