The 2020 GMC Sierra Heavy Duty has been redesigned from the ground up to combine even greater capability for towing trailers with style, and has been packed with the latest technology available on heavy-duty pickup trucks in general.
An even bolder exterior design is emphasized by the new signature lighting, which includes prominent so-called “light blades,” consisting of LED daylight driving lights. LED technology is used almost everywhere on the car, including for the new headlamps, taillights, optionally available fog lamps and other elements, such as the available roof marker lights.

The interior has been redesigned as well, now offering best-in-segment head- and leg room for the Crew Cab version. The driver benefits from an even higher driving position, while the optionally available head-up display is a first for its segment.

Towing fans will rejoice at the news that the model can now be had with a segment-first Allison 10-speed automatic transmission paired with the tried-and-true 6.6L Duramax turbo diesel. With 445 horsepower and a massive 910 lb-ft of torque at its disposal, the legendary Duramax engine now has increased cooling capacity mostly thanks to the introduction of a dual-path intake system that uses the prominent hood scoop to cool air. As before, dual rear wheels and single rear wheels configurations are available. 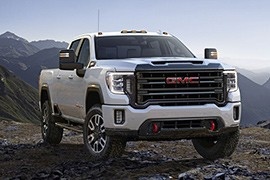