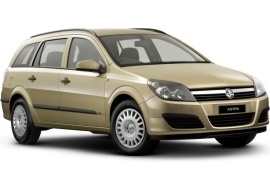 The estate version of the fifth generation Holden Astra was added later to the car line-up than the hathcback.
The car was at first sold in Australia alone, and only in June 2008 was it sold in New Zealand after a 4 year absence. Later during the generation, diesel engines were added to the line-up, starting with 2006. The 1.9 CDTi was offered either with a 6-speed manual or a 6-speed automatic gearbox. Other features worth mentioning include NCAP’s top safety rating, Interactive Driving System chassis, ESPPlus, Traction Control, ABS, Cornering Brake Control and optionals like Continuous Damping Control.