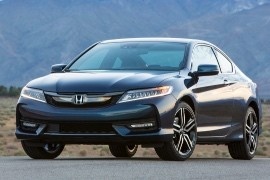 The ninth-generation Honda Accord received a refresh for 2016, the same happening to the coupe version as well.
Visually, the Accord Coupe got new headlights and taillights, modified bumpers, new rims, grille and optional sporty cladding. Mechanically, the 20165 MY Honda Accord Coupe received higher performance dampers and new bushings, bigger rims on the Sport and Touring trims as well as the new Straight Driving Assist that utilizes the vehicle’s Motion Adaptive Steering System to reduce the driver’s workload when running on a canted or crowned road surface. 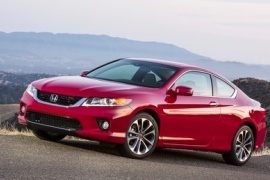 The ninth generation of the U.S. model of the Honda Accord was also offered as a coupe, like all of its previous generations. It was the first Accord Coupe that was also available as a plug-in hybrid.

The Accord had a long history in its back before it reached its ninth generation. It had 37 years, to be more accurate. The renown reliability and the ease of drive made the Accord the best selling mid-size sedans on the market. For some, the ninth coupe generation may look a lot like the model it replaced it, but it was almost completely new from top to bottom.

The outside styling kept the overall shape in a fastback look, but it was slightly shorter with the wheelbase decreased by 16 mm (0.6”) and 43 mm (1.7”) in length. There were some chromed details on the outside, such as around the grille and around the side windows.

Inside, the interior offered better rear passenger legroom despite the shorter wheelbase over its previous generation. That was possible by moving the front seats forward since the car had a different front suspension. The dashboard featured two displays on it, one for the on-board computer and navigation system and the other exclusively for the audio. Only the latter was a touch-screen since the former was too far to reach by the driver.

Under the hood, there were few engine options, starting with a 2.4-liter unit. For the ecology fans, the manufacturer installed a plug-in hybrid version with a 2.0-liter Atkinson Cycle gasoline engine. The top version remained the 3.5-liter V6. The V6 was fitted as standard with a close-ratio 6-speed manual. 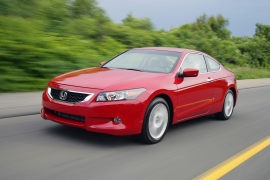 The 2007 North American International Auto Show in Detroit saw the launch of the new Honda Accord Coupe.
The Accord Coupe is made exclusively for the North American market and introduces a 3.5 liter VTEC engine. Honda Accord holds an impressive record in the US market, being the top Asian car in several tests and receiving over time numerous awards in consumer satisfaction, crash test, fuel economy, emissions control and reliability. Among reliability, fuel efficiency and value for money the 2008 Accord Coupe comes with a high quality interior loaded with techy features, but a somewhat controversial exterior design. 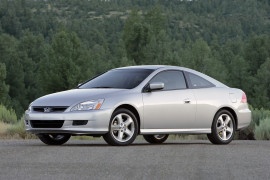 In 2006, Honda introduced a facelift for the entire U.S. model’s sixth generation and brought a long-awaited manual V-6 version for the coupe.

In 2005, Honda Accord celebrated its 30th anniversary, and that called for some special editions. But the Japanese carmaker did that change for the entire lineup and gave its customers more reasons for satisfaction. It didn’t make only some minor stylistic changes, but it added some small improvements on the drivetrain.

At the front, the 2006 model-year Accord coupe sported the same curved triangular headlights but added daytime running lights as standard. Previously, that featured was available only in Canada. A redesigned bumper with shorter but taller side-scoops adorned the apron, while the lip-spoiler was black. The door mirrors received standard heating. In the back, the carmaker installed a new set of LED taillights. A set of 17” light-alloy wheels became standard for the V-6 versions.

The interior was slightly redesigned, featuring a new steering wheel cover and restyled gear selector for the automatic transmission versions. Inside the instrument cluster, Honda adopted new colored gauges and. A new sat-nav system with a faster processor, more memory, and some detailed POI information replaced the older navigation device.

Most importantly, the Accord Coupe V-6 received a six-speed manual for the first time. Thanks to a new intake manifold, the 2006 version provided two more ponies than the 242 hp from the non-facelifted version. A similar change happened for the base, 2.4-liter engine, and gave it a boost of six horse-power. 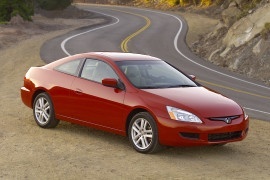 The U.S. version of the Honda Accord was completely different than the European Accord for the 2003 model. It even had a coupe version, that was not available in Europe.

The Accord was one of the best cars ever sold in the U.S., is on the top-ten list of best cars in America for more than a decade. Some generations also had a 2-door coupe version. One of them was the seventh generation.

The Coupe version had a completely different shape and look than the sedan. The car featured triangular headlights and curved shapes all over. The designers said that they were inspired by the cheetah look, with angled headlights and muscular rear quarter-panels. The drag coefficient of the Coupe was decreased compared to the previous generation and reached a remarkable 0.29 value, which was sports car territory. To improve the interior comfort, the Coupe featured a sunroof that opened up to 270 mm (10.6”). 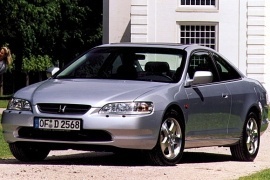 Designed and engineered in the U.S. and built in Maryland, the 1998 Accord Coupe offered a balanced mix of performance, fuel-efficiency and comfortable ride qualities.

While Honda was still trying to convince people to buy the Prelude, it introduced the Accord Coupe, which proved to be, somehow, a far better option and, along with the S2000 introduced in 2000, it killed the Prelude.

Honda agreed to have its Accord Coupe designed in its studios from L.A. and built it in the U.S., where it had the biggest market. But it didn’t keep it only on the State-side of the Atlantic. It crossed the pond and landed on the European continent as well. It was longer, wider, and sat lower than its four- or five-door sibling from Europe, but it shared some underpinnings with that for the suspension.

Inside, Honda offered the Accord Coupe with tons of features so it could make occupants’ lives more pleasant on long journeys. The front bucket-seats offered good comfort and side bolstering. In the back, the carmaker installed three seatbelts but only two headrests. Honda considered installing a split, 60/40 rear seat backseat to expand the trunk area or to load longer objects. Among other features, the Accord Coupe sported wood-trims on the dash, power everything (doors, mirrors, seats, sunroof) and dual-airbags.

Under the car, Honda installed a four-link double-wishbone front suspension and a five-link independent rear one. Under the hood, the Japanese carmaker offered the Accord Coupe with a 2.0-liter VTEC engine paired to a standard five-speed manual, while the full-options model featured a 3.0-liter V-6 paired to a four-speed automatic. 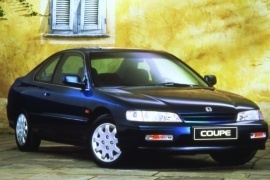 In 1993, Honda retired the fourth generation of the two-door Accord and left a one-year gap before introducing a coupe for the fifth generation, but the wait worth it.
Finally, it was a proper coupe, not a sedan with two longer doors as the CC generation (the fourth). Even though it was based on the Accord V platform, it showed a completely different styling. Moreover, Honda built the car together with Rover, but each carmaker used some specific parts and bodyworks.

The coupe featured a lower height than the four or five-door sedan. Its front fascia showed similarly shaped headlights with wide lamps since its predecessor was criticized for its weak lights. In the back, Honda installed similar taillights to those found on the U.S. model.

Inside, there was a curved dashboard design that looked very similar to the one installed in the sedan. The instrument cluster was extended wider than the instrument panel and included the climate controls and the center vents. Its short center stack included only the digital clock and the sound system. Its front bucket seats were covered in velour for the base trim levels and in leather for the full-options. In the back, the Accord Coupe offered moderate legroom but decent headroom for two adults.

Under the hood, Honda installed a choice of two engines for most parts of the world and the impressive 190hp H22 engine for specific markets.