The 2019 Honda Civic Coupe was introduced along with the facelift for the entire tenth generation of the compact Civic.
It featured new improvements in the equipment and accessories.

The tenth generation of the Civic Coupe came back with better suspension, better safety equipment, better styling and a big trunk. But it also came with some design flaws that had to be corrected. In 2018, Honda showed that it listened to its customers and changed the Civic and the Civic Coupe.

For the 2019 model year, the Civic Coupe was offered in four different trims: LX, Sport, EX and Touring. It was also offered as SI as a separate offer on the market, with its own package that was added to the special engine. The restyled lower bumper gave the Civic a wider look and it was complemented by new, blacked-out headlights. On Touring trim, the LED headlights were upgraded with a new design to give the lights a wider and longer beam. At the rear, Civic Sedan’s lower bumper has received a chrome strip. Civic Coupe has received a special new color named Tonic Yellow Pearl.

Inside, the 2019 model featured an upgraded sound system that featured a volume knob. The non-facelift version was highly criticized by customers and media for replacing the classic knob with a touch-slider that was harder to operate while driving.

For the Sport trim level, the Coupe received a naturally aspirated 2.0-liter engine that was mated as standard with a 6-speed manual or an option for a CVT. The other trim levels featured the 1.5-liter turbocharged unit. 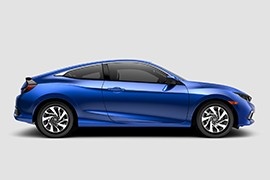