The fifth generation of the Hyundai Accent was introduced at the Orange County International Auto Show.
The car’s evolution showed an increase in dimensions and practicality.

The Hyundai Accent stepped-up with more High Strength Steel made by the Hyundai steel factories. Due to intensive use of HSS, less steel material was required but the final result was a 32% stronger body and only 11 kg (22 lbs) more weight added to the unibody construction.

When viewed from some angles, the 2017 Accent looked like a shrunken Sonata. But, despite being smaller than the executive Hyundai sedan, it kept some nice proportions and elegance. Usually, the four-door, small class, vehicles don’t look very well. Their forms are compromised by the difference between the tall greenhouse and the rest of the bodywork. On the fifth generation of the Accent, even the big cascading grille looked good.

The interior was modern and well-equipped for its era. It featured a clean instrument cluster with analog round dials. For the infotainment system, there was a standard 5” TFT display on the center console. A bigger, 7” unit was offered as an option. Also, the backup camera was offered as standard.

For the engine compartment, the 2017 Accent up to four gasoline and three diesel units, depending on the market. The standard transmission was a 6-speed manual, while a 6-speed automatic, a 7-speed dual-clutch and a CVT were offered as an option. 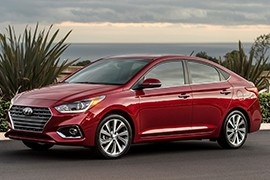