This is the eight Sonata from Hyundai.
It sounds just about right, maybe with a few notes on and off the musical stave. The look, the options and some of its new features are great. But some ideas might be wrong.

Hyundai doesn’t look too concerned if they will lose some customers aged over 40 or 50 years old. Their bet is for the younger drivers and this is why they designed the 2020 Sonata with a sportier look and a lower stance on the road.

Total length has been increased compared to the previous generation by 45 mm (1 in) reaching a total of 4.9 m (192.9 in). The roofline is sloped toward the rear, giving the Sonata a sports-coupe look.

On the interior, the Sonata has been reworked extensively, adding a touch of luxury and a spice of modernism due to its Bose infotainment system equipped to pair with Android Auto and Apple CarPlay. But the redesigned steering wheel looks like it plays a different song than the rest of this Sonata, with a weird-looking 4-spoke design.

Under the hood, though, the engine department didn’t play the right note since they are offering only two engine choices. Both of them are four-bangers: one is a 2.5-liter naturally aspirated, which offers 191 HP, and the other is a 1.6-liter turbo with 180 HP. For the transmission, Hyundai offers an 8-speed automatic version for the 1.6-liter. 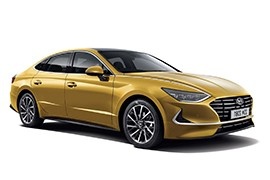