Nissan’s luxury brand offered the G37 as a Q60 IPL model in 2013.
It wasn’t really a competitor for other premium brands in terms of performance. But it was a step-up for the Infiniti toward that segment.

The IPL stands for Infiniti Performance Line and it was more like an S-Line trim level for the Audi, but it was no way near the BMW M or the AMG league. And it didn’t want to go there. But it was more than a regular G37 in terms of luxury and performance.

From the outside, the front bumper looked more aggressive, with a splitter extended on the lower side and side-scoops that hosts the foglights. Aerodynamic side-sills and bigger wheels were installed to improve the sport look. But, at the end of the day, it was the same Infiniti G37 as before, with a new badge and a new trim level.

Inside, the center infotainment system was on top of the dashboard as usual. Unlike the G37 though, the Q60 IPL came with a new interior. A good feature was the Bose sound system that made any journey more pleasant.

Some modifications were made under the hood and the Infiniti engineers squeezed another 18 hp from the 3.7-liter engine. The standard transmission was a 6-speed manual and an option for a 7-speed dual-clutch was offered. 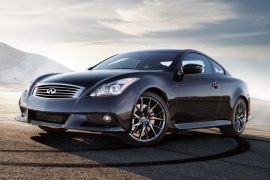