Infiniti refreshed the QX80 lineup in 2021 for the 2022 model year and brought slight exterior improvements and significant interior updates for its largest vehicle in the stable.
The Japanese carmaker decided to bump its entire lineup, and the QX80 flagship received all the credits and improvements to stay on top of its game. Even though it wasn’t the most powerful in its class, it still offered plenty of features to be considered a tough contender.

With a redesigned front fascia that featured the corporate grille with a chromed, surrounding rim, the QX80 provided a commanding view to the road. Its redesigned LED-enhanced headlights and the shining trim that adorned the lower side of the bumper offered the vehicle a premium look, in par with Audi, Mercedes-Benz, or Lexus, but more in the Cadillac and Lincoln styling. But it takes a keen eye to spot the differences between the 2018 and the 2022 model. Still, they exist and can be noticed on the lower grille, which features two slats instead of three.

Inside, the most important upgrade was for the infotainment system. It seems like Infinity used the same Nissan infotainment system since the Nissan Primera P12, with a screen and many buttons arranged at its bottom area. The 2022 QX80 welcomed its customers with a wider and taller 12.3” touch-screen installed on top of the center stack and offered Apple CarPlay and Android Auto connectivity.

Under the hood, Infinity placed the same 5.6-liter V8 engine paired to a seven-speed automatic transmission. It might not be the most fuel-efficient engine in its class, but it is appreciated for its smoothness and reliability. 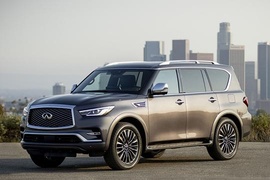