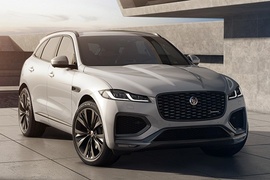 With the plug-in hybrid version of the F-Pace, Jaguar offered a good option for a luxurious, compact-sized, SUV for the market.
It offered good performances as well.

When most of the car-makers started to switch their attention toward the increasing SUV market, Jaguar just had to ask its sister-company Land Rover to help them. The result was the 2016 Jaguar F-Pace built on the same platform with the Range Rover Velar. In 2020, the British brand introduced a plug-in hybrid version, which proved to be an interesting vehicle with a fair electric range for the urban daily commute and a powerful drivetrain useful for long-distance trips.

The 2020 F-Pace featured a restyled front end, with a smoother hood and LED headlights. There was an option for pixel-LED, which analyzed and adapted the lights if any oncoming traffic appeared. For the plug-in hybrid version, it featured fewer air-vents in the front. The big bumper featured three air-intakes, to complement the radiator grille and cool the brakes. In the rear, the same slim taillights as before were slightly redesigned and featured LED as well.

The interior was luxurious, with the Jaguar standards. The instrument cluster featured a centrally-mounted tachometer with the speedometer in the middle, on a TFT display, with two other screens on the left and right of it. On the center stack, there was a completely new infotainment system, with an 11.4” curved-glass HD touchscreen. On the center console, there was a gear-selector with a lever, instead of the already known rotary knob.

Under the hood, the F-Type offered a choice of gasoline, diesel, and hybrid engines ranged between 250 hp and 404 hp. The latter was offered as a plug-in hybrid as well. 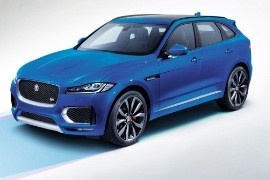 Industry is changing to better suit customers’ demand and that’s how we got a Jaguar crossover in 2015, known as the F-Pace.
The car has been designed to offer the same performance as any other respectable Jaguar has to offer, but in a larger body for those who like traveling in a higher profile car. Design wise, the Jaguar F-Pace is based on the award-winning C-X17 concept and blends styling cues from the F-Type coupe with the bulky shapes of a crossover SUV. The interior follows the same recipe, wit ha Sports Command driving position providing an authoritative view while still retaining a sports car feeling. Lined with fine leather, the whole interior is dominated by bold shapes toned down a bit by suave mood lighting. The F-Pace is built on a new platform, called the Lightweight Aluminum Architecture and in its top trim, the car comes with Adaptive Dynamics to offer the best damping possible, as well as tons of other electronically-controlled safety systems and riding enhancements.