Jeep Renegade was first produced in 2014 and has gone a long way from its debut, improving the successful formula of the previous highly-appreciated models.
With cutting edge systems and comprehensive equipment, the new Renegade goes beyond limits and offers a new engine range developed to ensure maximum fuel efficiency and performance both on and off-road.

With new Traffic sign recognition system, new headlamps with full-LED daytime running lights, new turbo petrol engines that were tuned in over 75,000 hours of virtual analysis, 60,000 hours of off-vehicle testing and five million kilometres driven worldwide both on and off-road to test robustness and reliability, it is safe to say that the new Jeep Renegade has established itself as a robust car that you can depend on. 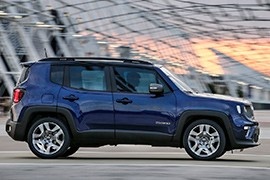