The 2013 Kia Forte was right between the small Kia Rio and the midsize sedan Kia Optima, which made it a good affair for a family.
It had plenty of features to offer.

Kia made a name of itself by offering decent prices for decent vehicles. They might not have the best materials in the industry or the latest technology inside, but they are built to last on low running costs. The exterior design for the 2013 Kia Forte was inspired by the European styling concepts for the four-door sedan and the 5-door hatchback.

When compared to its previous generation, the 2014 Kia Forte was bolder, roomier and better equipped. It had the European influenced design with longer headlights. The two trim levels available offered enough features for a family and in the rear, thanks to its bigger wheelbase, had room for three people. The rear taillights were offered as an option with LED. The infotainment unit had a large screen and a rear-view camera.

In the instrument cluster, there was a 4.2” TFT screen offered as an option. Like other Kia models, the Forte joined the trend with the electric power steering instead of the hydraulic type. 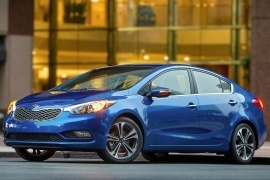