Most probably, 10 years ago, we would’ve never though that KIA would evolve the way they did over the past years.
And since their cars became better and better, their cost increased as well.

The KIA Sorento’s price launched in 2020 was the highest compared to the previous models and had a lot to offer.
The most notable aspect is that the new Sorento offered 7 seats and that made it an ideal car for large families.

The Sorento came with only one engine version, a 2.2-liter diesel developing 198 hp. It was available with a 4-wheel drive and the standard included a 6-speed manual transmission. Buyers also had the option to choose an 8-speed automatic transmission.

The road visibility offered by the Sorento was beyond reproach, due to its large windscreen and the “throne-like” seating position, plus thins pillars. The overall feeling was of safety and control.
The infotainment system offered both Apple Car Play and Android Auto, with a 7.0 inch or a 8.0 inch touchscreen depending on the trim level. The more expensive trim levels offered improved audio with the aid of 10 Harman Kardon speakers. 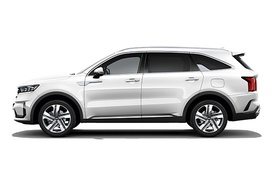