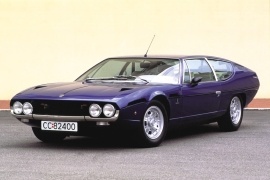 The Italian’s Rolls Royce at the time, the Lamborghini Espada was a love it or hate it type of vehicle.
Revealed in 1968, the Espada was the fastest and the most successful 4-seater Lamborghini produced by the mid 70’s. The grand tourer’s name referred to the Spanish sword the bullfighters used on the bullring.

Its distinctive exterior design was the work of Marcello Gandini from Bertone, the same designer who drew the Lamborghini Miura and the Countach. Gandini used the designs of the Marzal and the Jaguar Pirana to create the Espada. While the Marzal had gullwing doors made entirely out of glass, the idea was dropped for the Espada due to weight and complexity. The rear-mounted engine idea was also abandoned and the Espada featured a front-mounted powerplant.

The Lamborghini Espada had a bold design, the kind of look specific to concept cars rather than series cars, but Lamborghini had the courage to do it.

Inside, the Espada resembled the Marzal a lot. What was the most important, the considering it was the company’s first 4-seater, the rear bench was incredibly well executed.

The stylish cabin was fitted with leather upholstery, real wood trims and a wooden steering-wheel, as well as simple and easy to read gauges, and intuitively placed controls.

With the first series produced by 1970, the Espada featured a V12 powerplant (as all Lamborghinis did by that time), a 3.9-liter unit that put out 325 hp. Initially fitted with a manual transmission, the automatic gearbox was later offered.