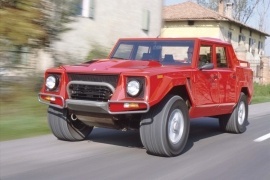 This is quite a departure from Lamborghini tradition which mostly includes fast, exotic cars.
But it seems that by 1986 the intention to build an SUV had become a reality with the prototype vehicle called the Cheetah. It was intended for military use and it rolled on a Chrysler V8. The LM001 appeared after development but it had an AMC V8 engine. This car was further tested and after it was established that it handled bad off-road due to the rear mounted engine, the LM002 came out with a front mounted motor. Also called the “Lambo-Rambo” tihs car was also sold for civilian use with a luxurious trim package.