The second generation Mark LT was canceled for the United States but it was kept for sale in Mexico, where it is the brand’s best-selling model.
The Mark LT is based on the 12th generation Ford F-150, from which is not very different apart from a few styling approaches like the front fascia ad the taillights. Among the interior features, it has full-covered leather seats, wood trimmings, leather covered dashboard and steering wheel as well as an LCD based infotainment system mounted on the central console. The Mark LT comes in two variants, a short and long bedded model. 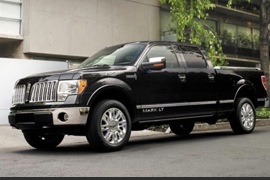