The first all-new Lotus since the British carmaker released the Elise in 1995, the Ever was unveiled in 2008 at the British Auto Show as the world’s only mid-engine 4 seater.
Designed for customers looking for exclusivity and rarity, the sports car was produced in a maximum of 2000 units a year. crafted at Lotus’ manufacturing facility in Hethel.

The exterior design inspired agility and sophistication, with muscular rear haunches and low and wide forward proportions. While the design made it clear that it was a Lotus by maintaining some of the well-known styling cues, the Evora distinguished itself with the undulating shoulder line.

Inside, unlike the minimalist racing-car-oriented design Lotus used us with, the Ever had a more sophisticated and softer approach, using high quality materials providing a luxurious ambience.

With breathtaking performance, the Evora featured a tweaked Toyota engine, a 3.5-liter V6 unit that produced 280 hp. With a body weight of only 1350 kg, the Ever could sprint to 100 kph in less than 5 seconds.

The Japanese grip masters Yokohama partnered with Lotus and developed bespoke tyres especially for the Evora, the sports car featuring 22/40/18 at the front and larger 255/35/19 at the rear. The sidewalls of the tyres wore the LTS badges. 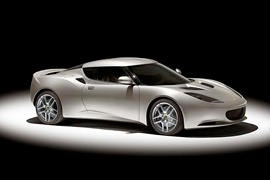