The sixth generation of the Maserati Quattroporte was introduced in 2013.
Three years later, the four-door executive sedan received a major upgrade.

Maserati is not just another brand. It is the four-door version of a Ferrari and that is backed up by its Ferrari engines and the emotional design. The first generation of the Quattroporte (four-door) was introduced in 1963 and evolved ever since. The Italian car-manufacturer tried to offer as much luxury as possible in a car that could match the pace of a supercar and still offer the comfort of an executive sedan.

The facelift introduced a new grille design with vertical chromed slats. There was a new design for the front and rear bumpers, and matte black side sills. The aggressive stance of the car was enhanced and offered a sportier look for the GranSport version, with the introduction of carbon-fiber details. The GranLusso featured more chromed elements in the front bumper.

Inside, there was a new dashboard with an integrated 8.4” with touch controls. A new set of controls for the climate control unit was installed. For the interior, the Italian car maker worked closely with the famous fashion designer Ermenegildo Zegna and offered a 100 units, limited edition, Zegna, which featured 100% silk in the seats, an leather side bolsters and a few other unique exterior details.

For the drivetrain, the Quattroporte retained the three engine versions as before, with a 3.0-liter V6, a 3.8-liter V8, and a diesel V6. All versions were turbocharged, and the gasoline engines were supplied by Maserati’s parent company, Ferrari. 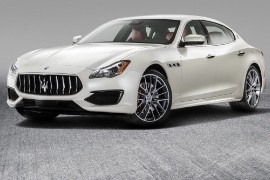