The Mercedes-Benz A-Class L Sedan is the newest sedan to debut in the three-pointed star’s compact car family, having been unveiled at the Auto China 2018 motor show in Beijing.
With sales reserved for the Middle Kingdom and developed with Chinese customers in mind, the A-Class L Sedan is exclusively manufactured by Beijing Benz Automotive Co., Ltd (BBAC), which is a partnership between Daimler AG and BAIC Motor. Available since 2018, the A-Class L Sedan can be powered by one of two four-cylinder gasoline engines that are also available in the fourth-generation Mercedes-Benz A-Class hatchback and the regular A-Class Sedan, which is virtually identical save for the standard-sized wheelbase and rear doors.

A major center of attention during the model’s development was the increased knee room for the rear passengers, so the A-Class L Sedan’s wheelbase has been increased by 60 mm to 2789 mm compared to the normal A-Class and A-Class Sedan. During the first year of production the car was only available with a turbocharged, 1.33-liter four-cylinder gasoline engine that offers two power outputs, 100 and 120 kW. Later on, a more powerful turbocharged 2.0-liter four-cylinder with 140 kW on tap, sent to the front wheels via a 7-speed dual-clutch transmission that’s available as standard. Like its platform cousins, the model is equipped with the latest driving assistance system, with active safety being at the highest level in its segment. 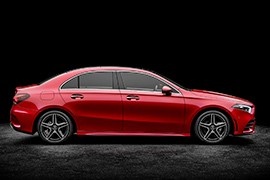