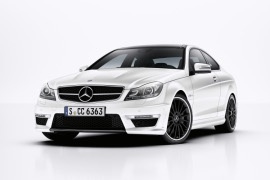 In 2011, Mercedes-Benz introduced a facelift for the C-Class and enhanced the car’s lineup with a two-door version that received the AMG blessing.
After failing to convince customers with the three-door hatchback CLC, and its predecessor C-Class Sport Coupe, the German carmaker introduced a proper two-door coupe for the C-Class. While it wasn’t available when the W204 C-Class was ready in 2007, by 2011, it was completed and launched with a full engine range, including the powerful C63 AMG version.

Unlike the rest of the C-Class Coupe range, the AMG version featured a new, high-gloss black apron at the front flanked by two side scoops where the carmaker placed the LED daytime running lights. A wing-like chromed slat supported the wide Mercedes-Benz badge on the grille, while the hood sported two powerdomes, evoking the massive V-8 engine that powered the car. A set of 18” alloys with an AMG signature provided a striking, aggressive look for the C63 AMG. A lip-spoiler adorned the trunk lid at the back, while on the lower side, it revealed four oval-shaped exhausts.

Inside, the carmaker installed the same dashboard as the one from the facelifted C-Class sedan (W204) with a vast instrument cluster extended above the center stack. At the front, a pair of sport bucket seats with high bolstered areas and leather upholstery. In the back, the carmaker installed a 60/40 split-folding bench profiled for two passengers, with a storage area between them.

Under the hood, AMG worked its magic on the 6.2-liter V-8 engine that produced 457 hp. As an option, the carmaker offered a performance package that added 30 more ponies. The seven-speed automatic (AMG Speedshift) gearbox was fitted as standard. 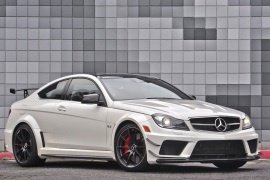 With its new C63 AMG Coupé Black Series, AMG is presenting an exciting sports car for enthusiasts who are passionate about sports cars which are big on horsepower, and this marks the impressive continuation of the Black Series strategy, which began back in 2006.
It doesn’t matter from which angle you’re looking at it: the new Mercedes-Benz C63 AMG Coupé Black Series displays its ties with motorsport from every perspective. The arrow-shaped front section with the central Mercedes star in the radiator grille is the visual synonym for its unfettered forwards thrust. The air intakes in the striking front apron ensure reliable air flow through the large cooling modules. Two openings in the aluminum bonnet support the expelling of engine heat, whilst the struts positioned at an angle in the front apron emphasize the vehicle’s width. The black front splitter located at the lower end helps to balance the vehicle aerodynamically. Plenty of pulling power, an agile response and hefty torque - the qualities of the large-displacement AMG high-speed naturally aspirated engine arouse unadulterated passion in the driver. The jewel in the crown is the emotive, hallmark AMG eight-cylinder sound from the AMG sports exhaust system.