Creating a performance vehicle was already an easy task for Mercedes-Benz when it had the AMG department in its courtyard, but making it different was a different story.
The German three-pointed-star brand had a huge experience in motor racing in almost any category, from cars to off-road and trucks. It had performance versions for each car category, starting with the compact A45 AMG and ending up with the GLS63 AMG and everything in between. But the CLS Shooting Brake was a different kind of vehicle. While it wasn’t an E-Class or an S-Class, it offered room for four-and-a-half, a big trunk, and supercar performance.

After building the CLS lineup as a luxury four-door coupe, Mercedes-Benz raised the stakes and introduced a station-wagon version, named shooting-brake. The 2012 CLS Shooting-brake kept the same front fascia as its sedan sibling, but the designers changed the vehicle’s rear part. Its long, arched roof was extended all the way to the back and ended with a curved and sloped tailgate. On its sides, the designers included a third side window on the sides of the trunk. But the greenhouse height was the same as on the four-door version.

Inside, the carmaker installed two bucket-seats at the front and a bench for three in the back. Due to the tall transmission tunnel and the low roof, the middle seat in the back was good for those who deserved punishment. The rear bench was suitable for two not-so-tall adults. The bench’s split-folding system allowed an increase in the trunk area, ideal for loading skis or snowboards. 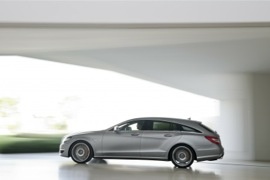