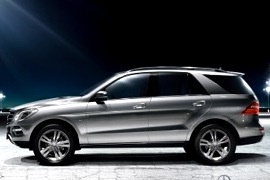 Mercedes-Benz introduced the third generation of the ML-Class in 2011 and brought more refinement into one of the cars that raised the bar for its competitors.
With more and more customers looking for SUVs with car-like handling, the German carmaker adapted its range. The carmaker sold one million units from the ML-Class from the first two generations before introducing the third one. It already knew how to win the customers’ hearts (and money).

At the front, its headlights were similarly shaped like those from the C-Class W204 non-facelift. The big grille with two horizontal slats sported the big three-pointed-star chromed badge in the middle. Mercedes-Benz installed new LED daytime running lights on the bumper’s sides. The ML showed an SUV styling with a two-box shape and tall greenhouse and side panels from its sides. Depending on the trim level and options, the car featured a pair of side-steps.

Inside, the carmaker installed a new dashboard design with a center stack that sported the infotainment display on top. The instrument cluster featured two round dials for the speedometer and tachometer, while the car displayed the rest of the data in a small LCD between the big dials. Inside the big dials, Mercedes-Benz installed two small gauges for the fuel level and the coolant temperature. Thanks to the high-mounted seats, the driving position was relaxed for long drives, while the rear passengers were able to slide their feet under the front seats. There was room for three adults on the bench since the transmission tunnel sat very low on the floor.

Mercedes-Benz offered the ML with a choice of three gasoline and two turbo-diesel engines. The carmaker paired all powerplants with a seven-speed automatic transmission that sent power in all corners. 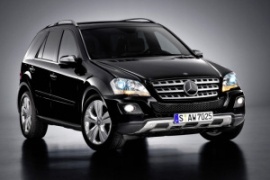 The facelift for the second generation of the Mercedes-Benz ML marked its debut at the 2008 New York International Auto Salon, in March.
It showed improvements on the outside and the inside as well.

While the first generation of the ML started on the wrong foot with a ladder-chassis under the bodywork, its successor came well prepared in 2005 with unibody construction. It was lighter, nimbler, and with an all-wheel independent suspension that offered more comfort and better cornering speed.

For the outside, there was an improvement for the headlights and the front bumper, where a wider gap was formed under the grille, to leave more room to cool the engine. For some engine versions, the cooling was an issue before the facelift and that gap was part of the solution. In the back, there was a new slightly modified bumper design. A new design for the door-mirrors was applied.

Inside, there was an option for a new Meda Interface. A new color display was installed, and the system allowed Bluetooth connectivity with music streaming. A USB port was introduced to allow connection to a mobile phone, streaming music from it and charge it at the same time. The new Media Interface allowed the Linguatronic system, with voice commands.

For the engine compartment, there were improvements for the diesel units that featured a Selective Catalytic Reduction (SCR) with an injection of DEF (Diesel Exhaust Fluid), also known as AdBlue which helps reduce the pollution. There were four diesel units and two gasoline, apart from the AMG version. 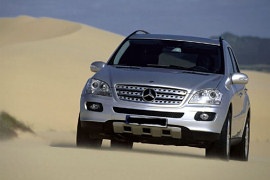 The second generation of the Mercedes-Benz ML was launched in 2005 and was a complete approach to the SUV market compared to its predecessor.
For starters, it lost the chassis in favor of a unibody structure.

The initial ML was built to tackle off-road courses with the confidence given by its ladder-chassis. But the downward of that system was a high center of gravity and it was heavy. The second generation was built mainly for roads and unpaved surfaces. And it was better in every way.

A new concept meant a different approach for its SUV. The big headlights resemble the ones installed on the S-Class model. The three-slots grille was silver and it had more options than before. The standard 17” light-alloy wheels were covered by fenders with flared wheel arches. In the rear, the tailgate was not straight up as before. For some markets and engines, the ML featured bi-xenon headlights.

Inside, the comfortable seats offered enough room for five. And, while it lost the chassis, it could host the spare-wheel underneath the trunk-floor. The total volume for it was smaller than before, but it was more than enough. For the driver, the instrument cluster offered round dials and an LCD between the speedometer and the tachometer. On the center console, there were more versions for the infotainment unit, and some were equipped with a navigation system.

The standard and only transmission was a 7-speed automatic gearbox (7G-Tronic). It featured all-wheel-drive traction as standard and, if some needed for off-road use, a transfer box with low-range gear was fitted. For those versions, the center and rear differentials were lockable. 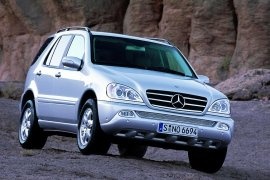 The first generation of the Mercedes-Benz ML was facelifted in 2001 and it received important updates to keep up with the competition.
It received new engines and new features.

For the 2002 model, shown in 2001, a total of 1100 completely new or modified components were used for the facelift. It wasn’t that the car was not fit for the market anymore, but with the new rules regarding pollution, some engines had to be improved and others needed to be completely changed.

On the exterior, the 2002 model ML-class featured a new front fascia, with clear lenses over the headlights. The turn-signals were moved from the front fenders into the side-mirrors cases. For a complete changeover of the exterior, new light-alloy wheels options were included on the list. In the back of the car, a different bumper was installed.

More improvements were made inside the car. A new steering wheel and a new center console were installed. The buttons for the windows were moved from the center stack to the center console, next to the gear-stick, regardless if the car was manual or automatic.

Under the hood, there were more important upgrades. For the diesel engines, a new, V8 4.0-liter turbocharged diesel was installed. It was mated as standard with an automatic transmission. The 3.2-liter V6 gasoline was replaced by a new, 3.8-liter unit and the 4.3-liter V8 was replaced by a 5.0-liter V8. The top-of-the-range ML55 AMG had better performances even though the engine output was kept the same. Most of the models were available with either a 5-speed manual or a 5-speed automatic, but some very rare units were fitted with a 6-speed manual. 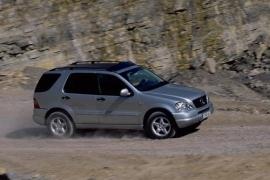 After almost two decades of selling an off-road vehicle as a luxury SUV, Mercedes-Benz has decided to build a proper SUV, and, in 1997, it launched the first generation of the ML-Class.

Mercedes-Benz made a bold move when it launched a vehicle into a segment where it didn’t was before and with a tough competition mainly from the American car-manufacturers.

The vehicle styling was new for the SUV market. The ML didn’t have quite the appearance of a tough off-road vehicle. Its curved lines were far from the boxy Jeep Grand Cherokee’s design. But the Mercedes-Benz made a vehicle to attract the car’s buyers into the SUVs market. The ladder chassis was the traditional way of building an SUV, but the rear independent suspension was something new.

Inside, there was more room in the front seats than in any other Mercedes-Benz car, including the S-Class. For the rear seats, there was enough room for three passengers. The trunk was large enough and, as expected, it had folding rear seats. For the base trim level, it had fake carbon fiber and cloth seats while on the top, Elegance trim level it featured real wood and leather seats.

The 1997 ML introduced the 3.2-liter V6 gasoline engine. It replaced the older inline-six due to its compactness. For the diesel version, it featured an inline-five of 2.7-liter. The transmission was permanent all-wheel-drive with electronic control that could brake the spinning wheels and send the torque to the wheel that had more traction.