As expected, the new CLA Shooting Brake came along with an AMG iteration to bring clients more versatility and extra sportiness.
The car has been revealed on the Internet at the same time with the standard version in November 2014.

Design wise, the CLA Shooting Brake AMG is almost the same with the sedan variant, using the same interplay between sharply defined lines and large surface expanses. The only difference is at the back, where the sloped roof ends just above the stoplights.

The interior comes with the same sporty yet elegant appearance and quality, while offering more headroom, better access to the rear seats and a bigger luggage compartment. The extra sportiness here comes via leather and alcantara trimmings as well as red stitching and inserts.

Performance is increased via AMG’s most efficient 2-liter four-pot fitted with a twin-scroll turbocharger and a sport exhaust and mated to a Speedshift DCT 7-speed automatic transmission sending power to all wheels. All these are backed up by a sport tuned suspension and steering system.

Soon after its introduction on the market, the CLA 45 AMG received an updated engine that produces 380 HP. 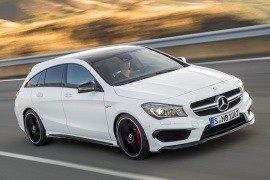