The original Mercedes-AMG CLA 45 was so well received that the Germans not only decided to make a second generation but also expand the lineup from a single model to two distinct versions.
This said, even the standard second-generation CLA 45 comes with a more powerful engine than its predecessor, not to mention that it’s simply filled with high technology.

Borrowing the same 2.0-liter, turbocharged four-cylinder from the second-generation A 45, the basic Mercedes-AMG CLA 45 has no less than 387 Ps and 475 Nm of torque, which allow the car to sprint from 0 to 100 kph (62 mph) in just 4.1 seconds. The CLA 45 S, on the other hand, benefits from 421 PS and 500 Nm of torque, which are more than enough to propel the compact four-door coupe from naught to 100 kph (62 mph) in 4 seconds flat. Both versions use a newly developed eight-speed dual-clutch transmission and all-wheel-drive to transmit the power to the ground. Standard on the “S” and available as part of an optional package on the base version, a so-called “Drift Mode” allows the model to send more power to the rear axle, whose each wheel can get up to 100 percent. 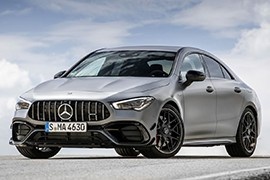