MINI is the only premium brand that is building only small class vehicles.
The carmaker evolved from one product to an entire range of small vehicles, which includes everything from three-door hatchbacks to models like the latest Clubman, which is a four-door hatchback. But it is a four-door in an unusual way.

In the company’s history there was a model back in the days that was intended to be used as a delivery car. Some sort of small MPV but in a British style and it was called the Clubman. The name remained, but its destination changed. Now it is a fancy car with two doors on each side and a swing-out double-door on the rear. This makes it the only hatchback with six doors on the market.

The new Clubman will have three or four-cylinder engines, FWD or AWD, paired with either a 6-speed manual transmission or an automatic transmission with 7 or 8 gears, depending on the engine. The base model is offered with only 106 HP, but the top version, the Clubman John Cooper Works has 306 HP and is AWD.

Inside, the main theme revolves around style, glamor and fancy options, such as the infotainment system that allows Android Auto and Apple CarPlay with the touchscreen on the center console. 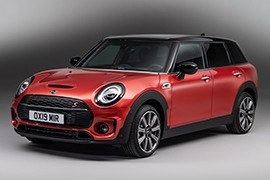