Once a simple hatchback in the small-segment, the Mitsubishi Mirage evolved into a different vehicle over the years.
Mitsubishi faced some financial troubles, but it had to introduce new cars on the market. Its aged L200 Pickup and Outlander were, basically, the only vehicles that could sustain the brand on the market. The Lancer was already old, and so was the Pajero/Montero. It tried with the Space Star, which was mostly a rebadged Colt, but its success was limited. Then, in 2013, it introduced the four-door sedan Mirage based on the same platform as the Space Star. It was designed especially for the emerging markets, but it was also available on the North-American continent.

The carmaker tried to offer an aerodynamically efficient vehicle with the Space Star and obtained a 0.27 drag coefficient. When it transformed the vehicle into a four-door sedan, that advantage went down the drain, but it was still good for the car’s size. But customers didn’t see that. They saw a vehicle with a grille too high, two ascending lines on the sides, and a sloped rear end.

Inside, Mitsubishi installed a rounded dashboard with a piano-black center stack. They looked good in some pictures, but it was hard to hide the low-quality materials used. A big infotainment system with a touch-screen display was available on the upper trim levels. In the spirit of its glorious motorsport heritage, Mitsubishi installed an instrument cluster where it displayed only a tachometer and a speedometer. Despite having room for four adults inside, the short wheelbase led to limited legroom for the rear passengers.

The Mirage featured a 1.2-liter gasoline engine paired to a five-speed manual or to a CVT gearbox. There was no other option for it. 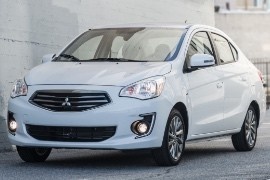